Two of Norwegian music’s finest, naughtiest and most innovative performers, Maja S.K. Ratkje and POING (Rolf-Erik Nystrom, Håkon Thelin and Frode Haltli), join forces and urge us to wake up when performing “Wach Auf!”. Through improvisation and highly original arrangements, revolutionary music from different places and eras are changed into burning, contemporary pieces that comment on and celebrate the people’s struggle for freedom through the ages.

The collaboration between Ratkje and POING started in 1999 when she wrote the piece “essential extensions” for the trio, their first work. A year later, they stood together on a stage at Saunabar in Helsinki and performed songs by Kurt Weill and Bertolt Brecht to everyone’s surprise. Since then, the have seen a repeated success of an annual night-to-1st of May concert at worn out pubs such as Tranen in Oslo joined by a festive crowd.

The repertoire has been expanded to include everything from national anthems from extinct Socialist states to pop songs from the 80s, folk music and workers’ songs from around the world. The concerts have lasted into small hours, with guests – professionals and amateurs, with poetry readings and speeches. A seemingly unfair mixture has gradually crystallized as a new, socialist interpretation of tradition with a concept that is considered rude because it is beyond ironic, anarchic because it is contradictory, and nostalgic beyond sentimental and “correct” interpretation of tradition.

POING and Maja have recorded an album with selected songs from this repertoire released by Øra fonogram, spring 2011. In the wake of the success of the album, they have performed concerts in Paris, Gent, Bologna, New York, Copenhagen, Oslo and at festivals across Norway. They often perform the Wach Auf! concerts with local choirs. 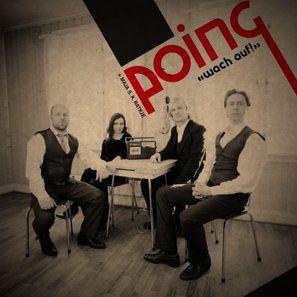 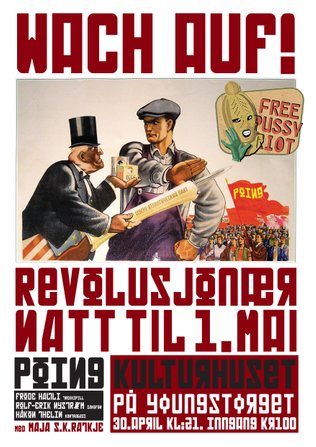